A colder winter this time around was my excuse for not running much in January. I waited to  do the first race in 2018 in Spain, knowing Spain will still be cold but not as much as Belgium.

I pre-registered for the Murcia Maratón 2018 scheduled on January 28, 2018. We took the late afternoon flight from Brussels Charleroi Airport to Alicante on Friday prior to the race, arriving just in time to catch the last bus going direct to Murcia. It was just a few meters’ walk from the Murcia Bus Station to our hotel, the NH Collection Amistad Murcia. 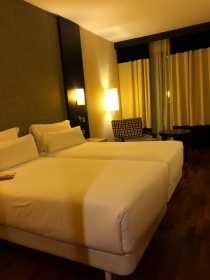 We rolled out of bed late on Saturday morning and checked out our view. Our window looked out to the El Cortes Inglés department store on the left, and the Arrabal de la Arrixaca on the right. The latter is a historical landmark, the ruins of an Islamic quarter in the 13th century.

We sat down to partake of the delectable offerings of the breakfast buffet. Can you see the champagne on the table? We’ve stayed in probably four NH Collection hotels by now and all of them have champagne for breakfast! 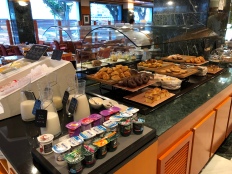 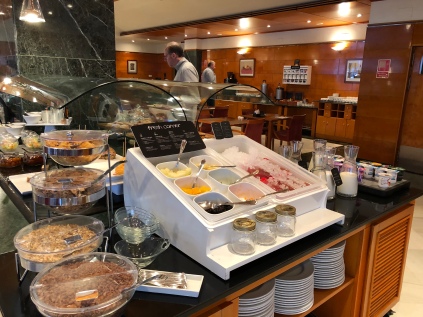 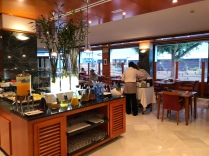 I used the hotel gym afterwards to do a quickie run to limber up for the marathon the next day. We then picked up my race bib across the street at the sports section of El Cortes Inglés, one of the race sponsors. Bib release was from 10:00 – 14:00, and 16:00 – 20:30. 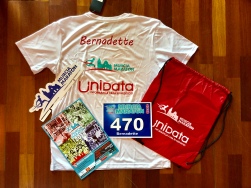 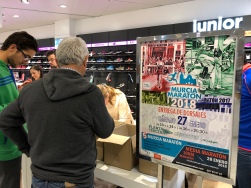 The swag bag contained the race bib, shirt, a metal medal hanger, and the race magazine.

We decided to do a walkabout to see a bit of Murcia. We stopped first to admire the Catedral de Murcia with its Baroque design and Gothic interiors.

The ornate 18th-century Episcopal Palace was beside the cathedral on the square. 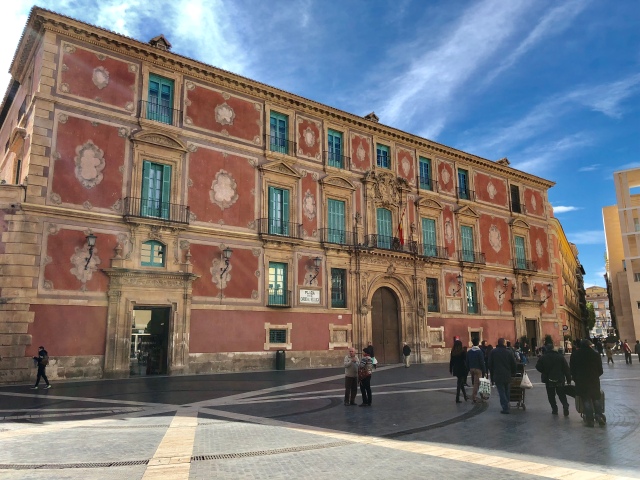 We walked further to see the Ayuntamiento de Murcia or the city hall. 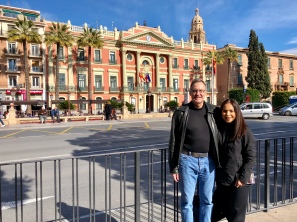 The city hall is in front of the Segura river with the old Puente Viejo bridge and a museum. A huge sardine monument was submerged in the river. We took a picture of the stone fish with a boat in the background to show the massive scale of the sculpture.

We did some shopping and napping before attending Mass at one of the chapels and an early dinner.

The race was scheduled to start at 8:30 AM on Sunday but was delayed because the police have not cleared the race route yet. There were grumblings and some runners thought it would be cancelled because of the rain and probably some minor flooding on the streets. I was not happy at the thought of coming all the way from Belgium and not getting to run!

The starting gun finally went off at 9:15 AM. The race had a time limit of six hours. Both marathoners and half marathoners started at the same time, with marathoners doing two laps. It continued to drizzle throughout the race, although the sun peeked out at the second half. 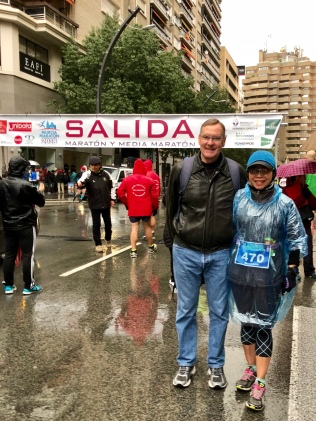 I did not take pictures of the race route but it was generally flat and did have some puddles along the way. There were pacemakers to help runners make their target time. Refreshments were available every five kilometers with the usual race provisions.

I crossed the timing mat in my usual slow 5:21:27. We had a late checkout so a shower in the room was possible before we walked to the bus station to catch the 17:00 bus bound for Alicante Airport. 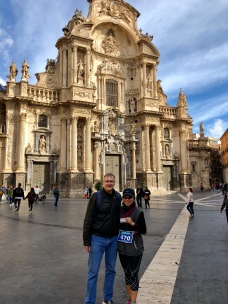 We had time to visit the Sala lounge before our flight at 20:15 PM. I replenished my energies quickly by eating their seafood paella and lots of soft-serve ice cream!

Like Loading...
This entry was posted in Marathons, Places to See, Race Reports, Things to Do. Bookmark the permalink.