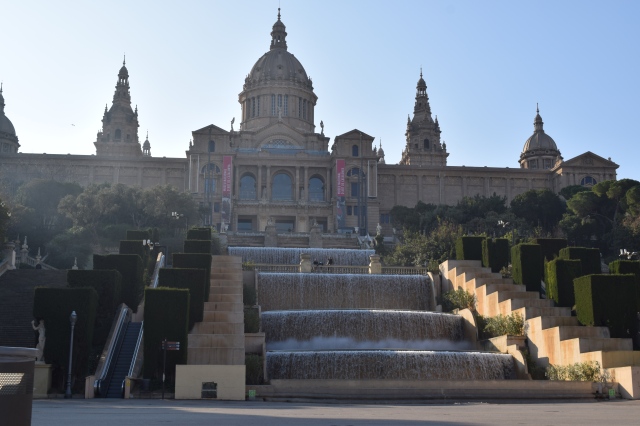 An overnight stay is just not enough time for Barcelona, one of the most visited cities in Europe, but this weekend was basically a quick run and return trip.

We flew into Barcelona from the Brussels Zaventem Airport on a Vueling Airlines flight on Saturday, March 12th. After almost an hour of delay, our 3:30 PM flight landed past 6:00 PM at Barcelona-El Prat Airport. We had to get to the Marathon Expo at Fira Barcelona which was only open until 8:00 PM. We hustled to get to the Aerobus A1 to take us to Plaza Espana 25 minutes away. Bus fare was 5.90 € per person. Plaza Espana was the first stop and we got off right in front of Fira Barcelona with less than an hour to go before the expo closing time.

The Marathon Expo was still in full swing when we got inside. I liked the layout of this expo. The bib pick-up was right at the entrance compared to other expos where you have to meander through the halls first before you can get your bib. I think getting the bib first is more efficient since the athlete gets that worry out of the way and can get on with browsing and shopping at leisure.

Since I was one of the last remaining runners to get the bibs, I did not get any goody bag. I only got the bib and the runner’s shirt. Oh well, lesson learned for arriving late. The most important thing was the bib with its disposable timing chip – and the very nice carnation pink runner’s shirt. I also claimed our Hola BCN Travel Cards which I ordered online for $28 for use with all public transportation in the city for the next two days. 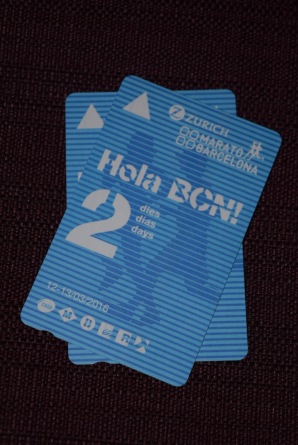 I bought a couple of bags of Aptonia fruit chews before we had to leave already. We exited the hall into the street facing the Palau de Congresos building. We stopped for a few minutes to watch the light and color show of the Magic Fountain of Montjuïc (Font Màgica de Montjuïc) around the corner. There were lots of people watching the show and we found out this show is only on Fridays and Saturdays every 30 minutes starting at 7:00 PM from February 18th until March 31st, and at 9:00 PM starting April 1st. 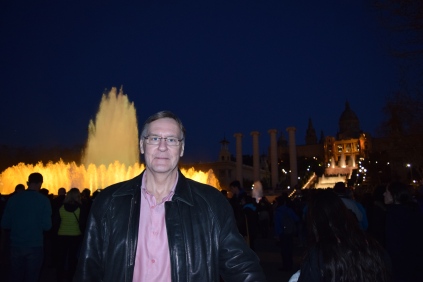 It was only a 350 meter walk from the Magic Fountain to the 4.5 star Crowne Plaza Fira Center, the official race hotel. I am always excited to see what our hotel room looks like wherever we are, and tonight was no exception.

We stayed in a spacious deluxe room with two double beds. The room came with complimentary bottled water and coffee making facilities. It was the first time for me to use the sleep aid spray, a hotel freebie mix of frankincense and eucalyptus that you spray on the pillows and apply on your temples. The spray did not work for me but I appreciated the hotel’s attention to detail. Richard, as usual, spent time searching for English-speaking news channels. Most hotels in Europe do not carry CNN. Instead, they have BBC. Unlike our hotel in Sevilla, Crowne Plaza did not offer the free Playboy channel. 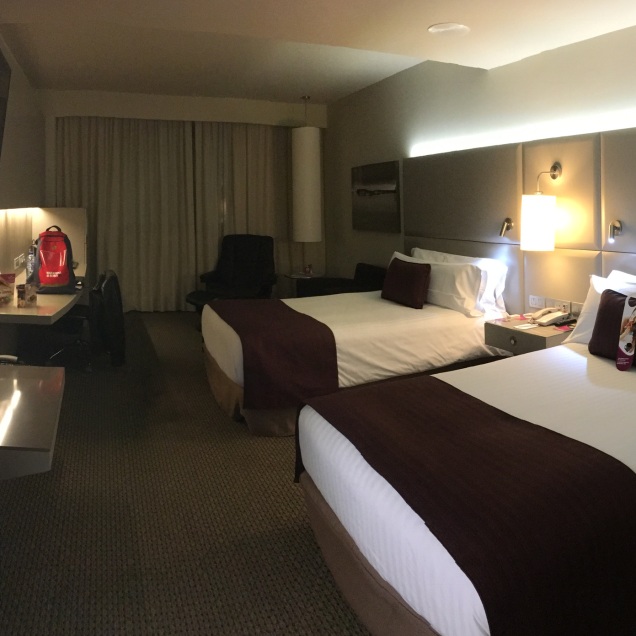 We were famished by the time we dropped our carry-on luggage at the hotel and headed out to the Las Arenas Shopping Mall, a former bull ring converted into a trendy shopping mall. Dinner was at Gustos Barcelona inside the mall. We both ordered the house specialties. I ordered the parcellada and Richard went for the arroz negro. I liked his choice better but we had no problem eating everything. We were that hungry. 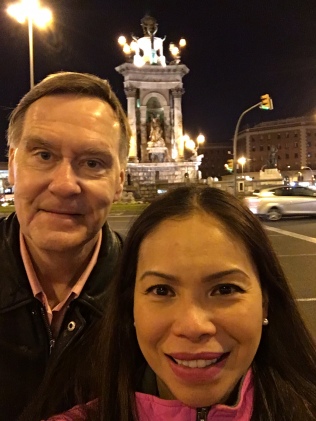 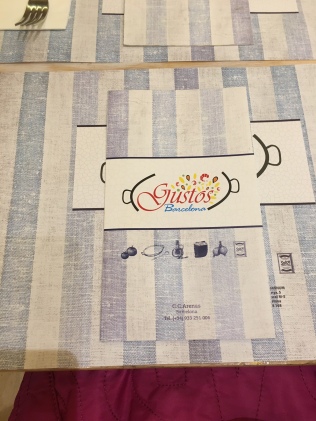 Hunger satiated, we then set out to take some pictures of Barcelona. We posed for selfies at the roundabout at the Fira Barcelona Center and the Las Arenas Shopping Mall. It was getting late but I really wanted to see the Sagrada Familia Basilica. We got on the Metro Line 2 going to Fondo and got off at Universitat three stops away. We changed to Line 1 going to Badalona Pompeu Fabra and reached our destination after four stops. We used our Hola travel cards for the Metro with no problems.

The Sagrada Familia Basilica is overwhelming up close with its intricate building details. It is a UNESCO World Heritage site, a Gothic cathedral in a perpetual state of construction since 1882. The basilica is finally expected to be finished in 2026. We were too late to get inside but we got to have our picture taken outside. We took the metro again and headed back to the hotel to call it a night.

Crowne Plaza opened the breakfast buffet area at 6:00 AM, an hour early for the runners. Richard was pleased to know that champagne was available for breakfast. Okay, sparkling wine. I better stop saying champagne when the wine is not from the Champagne region of France. It’s more posh to say champagne though, isn’t it? 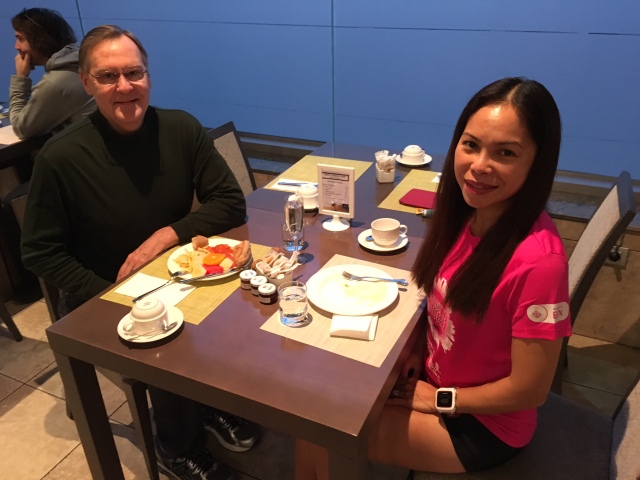 Zurich Barcelona Marathon 2016 is a bronze label IAAF road race with a six-hour time limit. 20,340 runners gathered at the Avinguda Maria Cristina by the Fira Barcelona Center. Because Crowne Plaza was just a few meters from the race start area, we left the hotel past 8:00 AM and had no problems getting to my rose corral. There were six corrals where runners had to line up based on their declared Personal Best (PB) times.

My corral finally got to the starting line 20 minutes after runners in the first corral took off at 8:30 AM. The race route was well marked and because of the sheer number of people running, it was impossible to make a wrong turn, which I’ve done in some past races. Runners can also follow the blue line on the pavement that marked the official race route. The route has very gentle rolling hills which provided interest and challenge to some runners.

The refreshment stations were well stocked. Water, energy drinks, bananas, oranges, nuts, and raisins were available. Three stations offered my favorite Gu gels. Tents beside the refreshment stations provided first aid, Vaseline and physiotherapy. Two points along the race had showers but it was too cold and most runners in front of me avoided these areas. I was cold even with my Adidas wool knit shirt and I wore my plastic bag cover until I was 2/3 into the race.

There were interesting sights along the course. We ran by the Camp Nou Football Stadium, home of the popular Spanish football club FC Barcelona,  after 6K and the Sagrada Familia at the 16K mark. It was hard to miss the Sagrada Familia from afar at the 35K mark; it dominated the skyline in the area. We also ran under the Arc de Triomf, a huge access gate built for the 1888 Barcelona World Fair. The crowds were very enthusiastic and the 47 animation points or the musical groups provided entertainment to both runners and spectators.

While waiting for me, Richard took some photos of the Fira Barcelona area.

I crossed the finish line and after getting my finisher’s medal, proceeded to get water and some oranges. A volunteer dressed me in the blue Zurich Insurance plastic rain coat to keep warm. Richard met me past the finish corral and we walked back to the hotel. 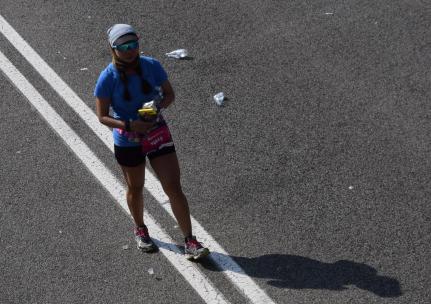 I think I love Crowne Plaza. They let us stay until 3:00 PM with no additional charge! I was able to shower and wash my hair with no rush. We walked back to Plaza Espana to get on Aerobus 1 which took us directly to Terminal 1 of the Barcelona-El Prat Airport. Our Vueling Airlines flight at 6:05 PM was also delayed. We arrived in Brussels past 9:00 PM. 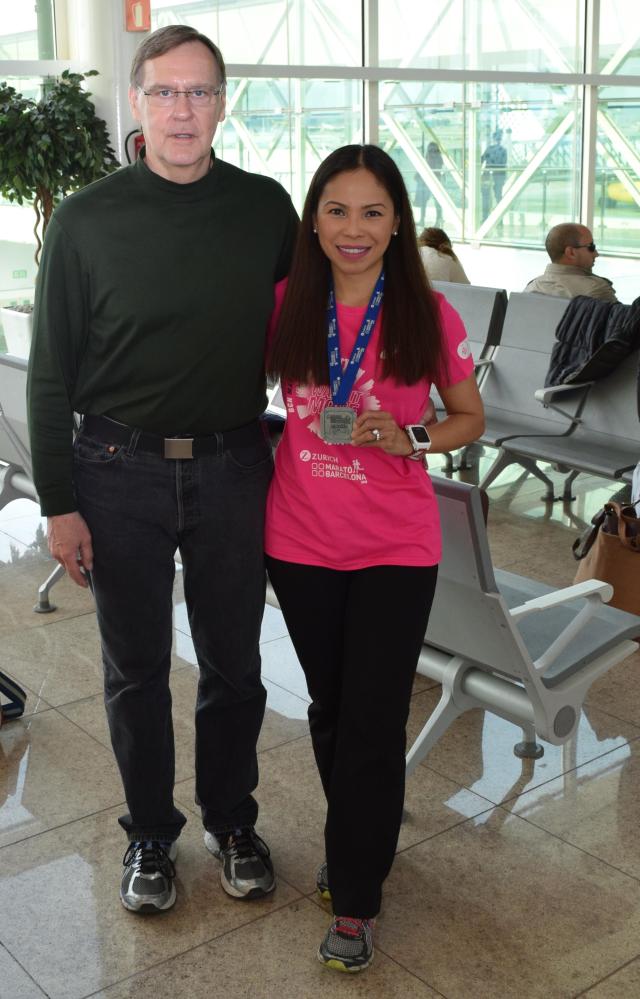 Yes, this trip was too short and that’s why we plan to visit again very soon. That, and hopefully run the next Barcelona marathon.