The Medieval Castle of Pafos, the Byzantine fort built to protect the harbor. The castle is  at the center of a busy history over many centuries of being built and rebuilt by Lusignans, dismantled by the Venetians, and rebuilt again by the Ottomans.

Pafos is a cultural hot spot this year owing to its status as one of the two European Capitals of Culture for 2017 chosen by the European Union. However, the whole island nation of Cyprus lends itself to culture with acres of archaeological sites to get lost in, the Greek mythology associated with its pristine waters, and wine that has been in continuous commercial production for the last 5,000 years.

CNN published 10 unique things about Cyprus in 2013. I only needed one thing to help us decide to visit the place: a marathon. There was one scheduled on March 5, 2017, a beautiful course that worked its way from Aphrodite’s Rock along the coast to vineyards before finishing right in front of the medieval castle.

We flew to Athens from Brussels South Charleroi Airport on Friday, March 3, 2017 on the 11:25 AM Ryanair flight. We arrived at 2:35 PM and waited at the business lounge for our connecting flight to Paphos at 6:05 and landed at Paphos International Airport at 7:40 PM. The hotel shuttle was already waiting to transfer us to the hotel which was 20 minutes away.

The breakfast area of the hotel overlooked the meadow on one side, and the resort complex on the other. I got my first taste of the famed haloumi cheese grilled to perfection. Just like champagne, this particular kind of cheese can only be called haloumi if it is made in Cyprus. 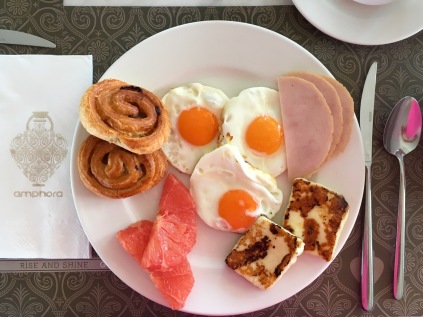 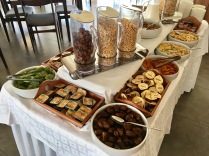 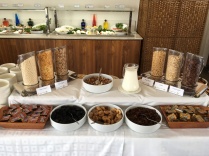 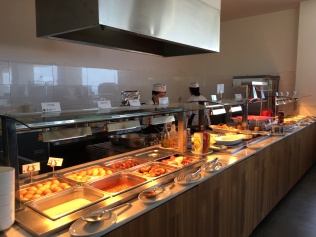 The bib pick-up was at the exhibition hall next to the castle. The sturdy goodie bag included a Cyprus Marathon coffee cup, the race shirt, free unlimited access to public transportation for the weekend, Biofreeze pain balm, and an Isogel. 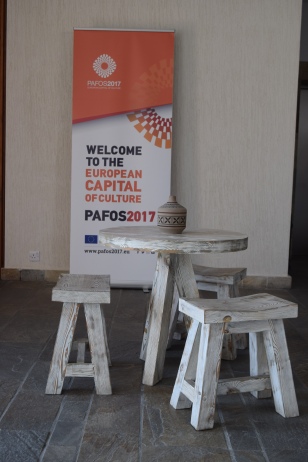 We took the taxi to pick up the bib but decided to walk back to our hotel which was only a mile away. We stayed at Amphora Hotel and Suites with its own beautiful beach. The one bedroom suite was designed with stark minimalism but it was huge and had a balcony, perfect for moon gazing, staring at the sea, or just chilling out. 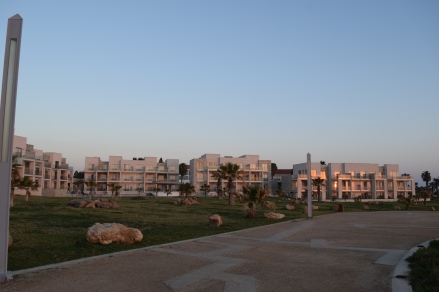 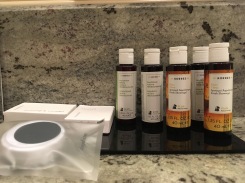 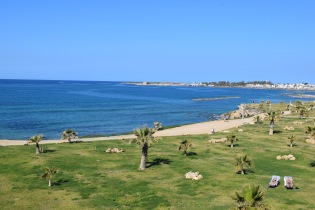 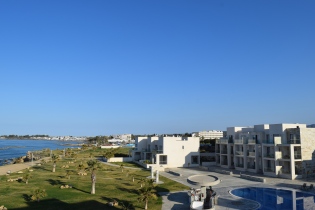 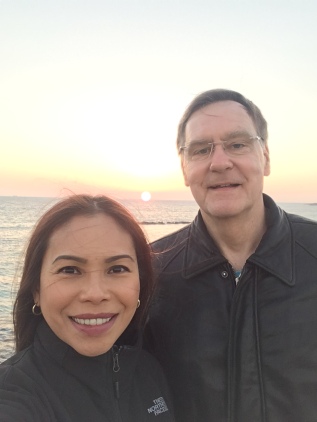 Later that afternoon we came out again and walked around the tourist area. We visited the Tombs of the Kings and saw some of the roads marked for the marathon. 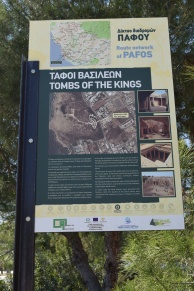 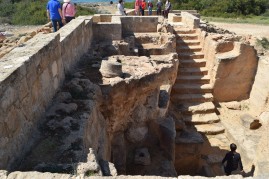 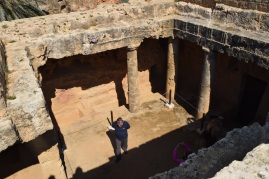 We also visited Saint Paul’s Pillar, an important site for religious pilgrims. Saint Paul was in Paphos in 45AD to spread the word of Jesus. He was successful in converting the ruler to Christianity but not before he was punished with 40 lashes for bringing the religion to the island. I was too late to attend the mass but did peek in and saw many parishioners who looked like British retirees. Paphos is popular with retirees from the UK. The island country has had a long history with the British Empire as a protectorate and a Crown colony up until the early 20th century.

We walked back to the tourist strip and had dinner at one of the restaurants. What’s interesting about the area is that by 7:00 PM, most of the restaurants are already closed. Not sure if they do this because it’s the off-season or if this is an island habit.

The start line for the marathon the next day was at Petra Tou Romiou or Aphrodite’s Rock, the fabled site where the goddess Aphrodite was born and rose out of the sea foam and the seashell.

Runners converged at the main bus station to be ferried to the start line by 6:20 AM for the 7:30 AM start. 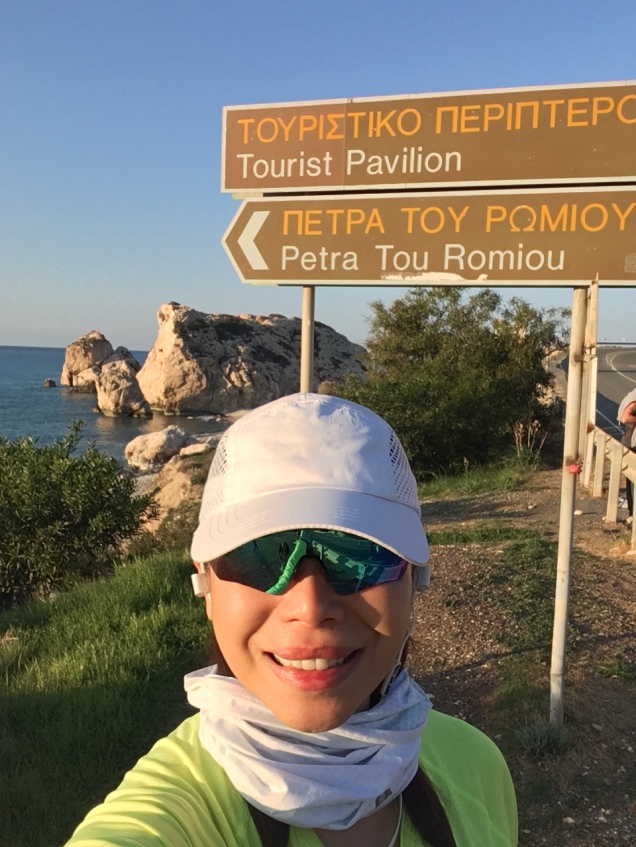 There were less than 250 runners for the marathon. The bulk of the participants were registered for the half marathon, the 10K and the shorter races. Most of the volunteers at the aid stations were British retirees, further proof of their continued integration in local affairs.

Richard, as usual, found some interesting cars while waiting for me. 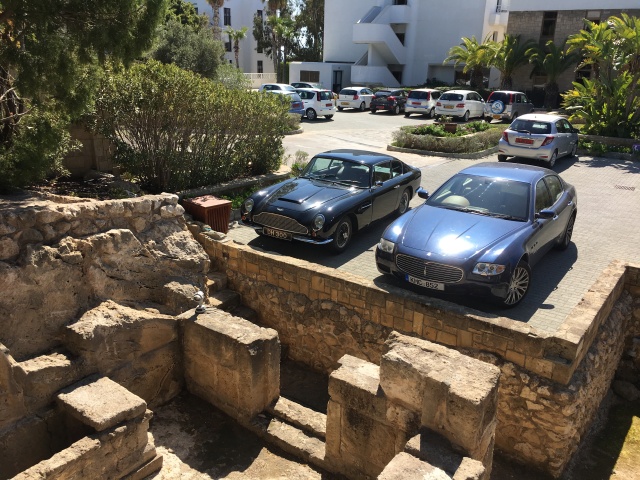 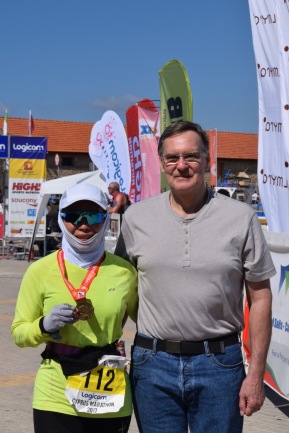 After the race, we walked along the coast back to the hotel. We stopped to buy from a British retiree vendor what is probably the best pistachio ice cream I have ever tasted! The hotel shuttle arrived at 4:00 PM to take us to the airport where we caught the 3.5 hour flight to Thessaloniki, Greece.

We took the bus from the Thessaloniki airport and got off at Aristotelous Square. We walked a few meters which brought us right to the front of the majestic Electra Grand Palace Hotel. We booked one night at this hotel since there were no direct flights from Paphos back to Brussels. 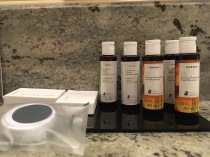 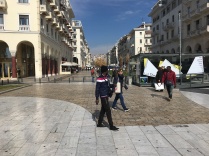 The square branched off  into many side streets filled with local markets. 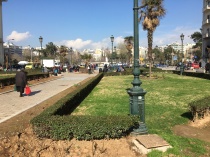 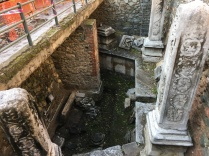 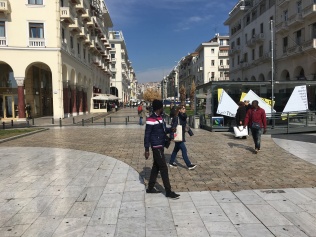