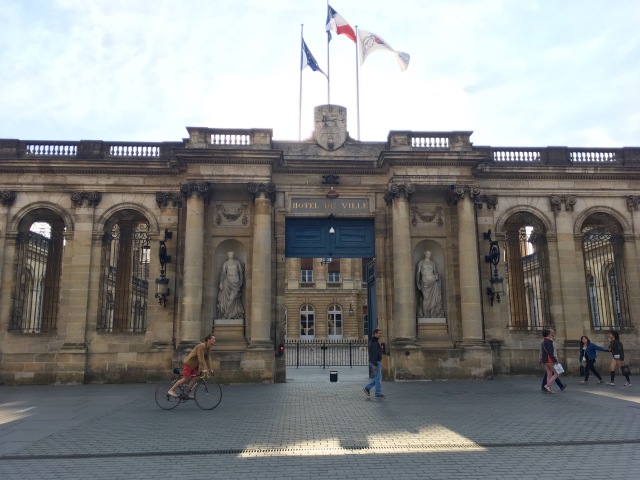 Vin Bordeaux anyone? Wine produced in the Bordeaux region of France dominates the market today, representing 38% of all still wine sold in the world. There are 10,000 châteaux in the region, with 250 considered as Grand Crus and commanding premium prices.

Bordeaux is not only a city of wine, however; it is also a city of history and religion. There is a place of worship almost at every corner; beautiful, ornate, Gothic exemplars of architecture that soothe the soul and provide quiet contemplative places for tourists and locals. Three of the city’s churches are part of the 78 structures along the route of the Camino de Santiago pilgrimage collectively designated as a UNESCO World Heritage site in 1993. The city is a good place to be during the Holy Week when Catholics make the rounds of churches for the Visita Iglesia (Seven Churches visitation).  The region has 5,000 churches.

We were fortunate to do our Visita Iglesia in Bordeaux. We visited the Cathedrale Saint Andrew de Bordeaux first on our way to pick up my bib. The cathedral, one of the three on the Camino de Santiago pilgrimage, is located beside the hotel de ville (city hall).

We were in Bordeaux for the Easter weekend and yes, to run the third edition of the Marathon Bordeaux de Métropole 2017. We picked up the bib at the village expo by the Maison Écocitoyenne. 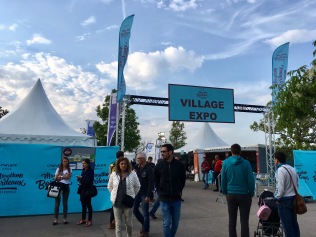 We visited the Eglise Saint Pierre next, a ten minute walk away from the village expo. I lined up along with the parishioners to kiss the feet of the statue of Jesus.

The altar of the Cathedrale Saint Andrew de Bordeaux

Our next stops were the Eglise Notre Dame: 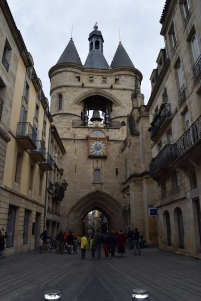 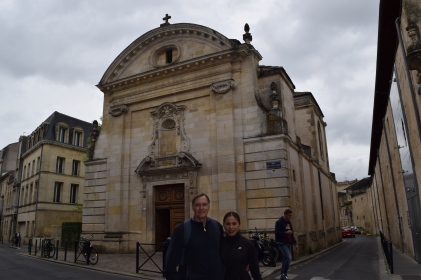 Finally, we made our last visit with Eglise Saint Eulalie: 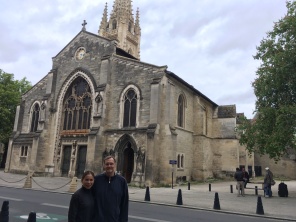 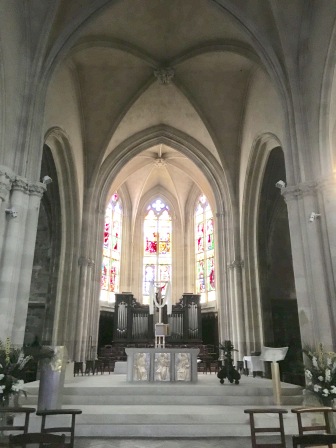 The city was declared as a separate UNESCO World Heritage site in 2007, with more protected buildings than Paris. 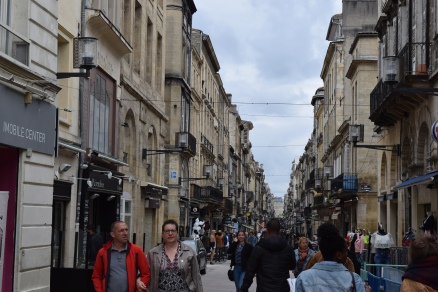 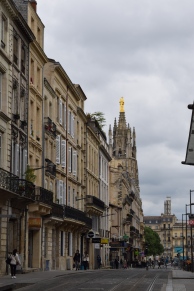 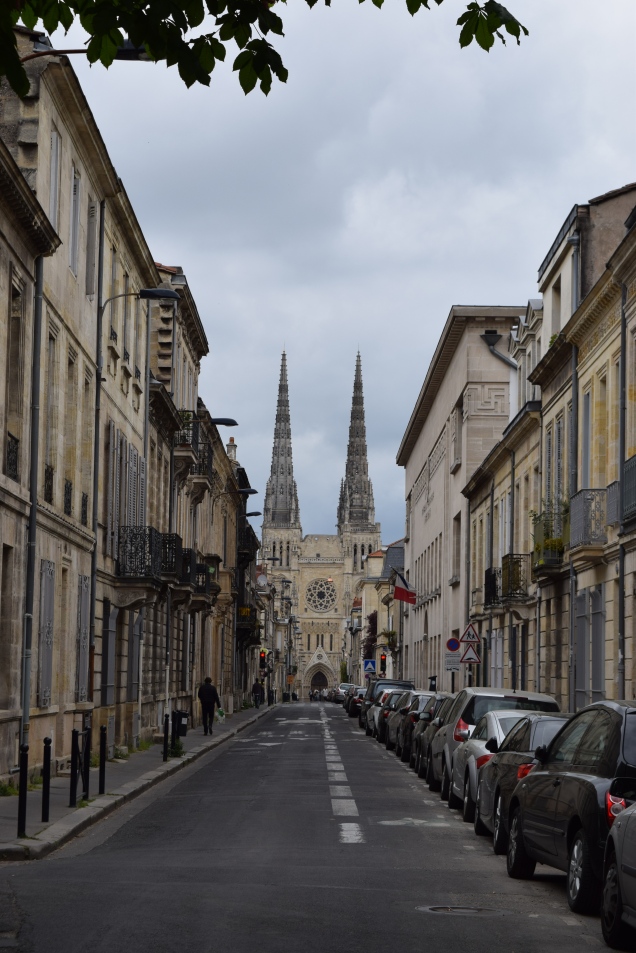 Getting around the city was very easy and cheap with the trams, buses, and boats. A day pass is only 4,60€; locals can get annual passes for as little as 11€. Marathon participants and family members can avail of the discounted price of 3€ for the day pass starting at 7:00 AM of the race day, April 15 until 7:00 AM of the next day. 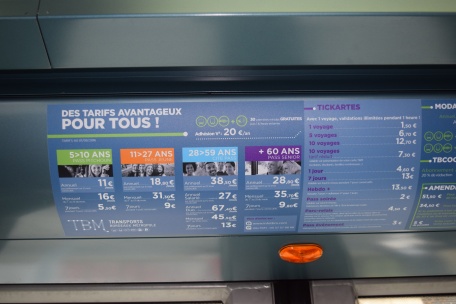 From Bordeaux-Mérignac Airport, you can take the 30-minute navette shuttle to take you to the main train station Gare Saint Jean. Alternatively, you can take Bus 1, get off at Lycées de Mérignac to take purple Tram A in the direction of Floirac Dravement and get off at Gavinies. Our hotel was just 200 meters away.

We stayed at the Hotel Ibis Style Bordeaux Meriadeck about two kilometers away from the race area. The room was cozy (read: small). The WiFi was strong and they offered an intercontinental style buffet breakfast. 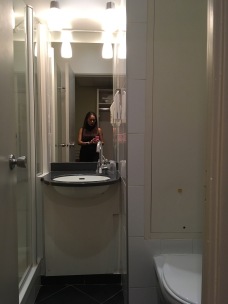 The marathon was at 8:00 PM on Saturday, April 15, 2017, starting and ending at the Place de la Bourse in front of the Water Mirror along the Garonne River. 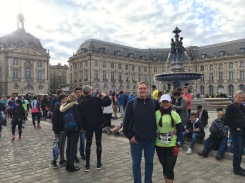 We had a generous time limit of six hours and the circular route was fairly flat. We saw the Cité du Vin Museum right off the bat, a place where you can be thoroughly educated on all wine-related facts. A live band was also playing for the runners.

We passed many of the city landmarks and the famed wine chateaux. 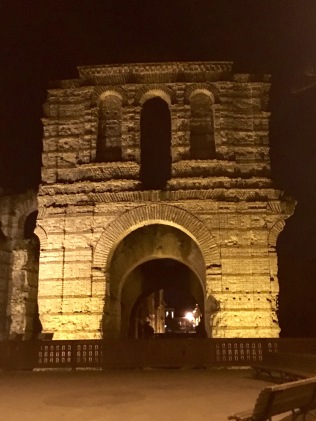 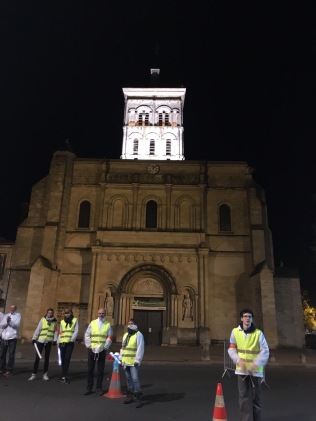 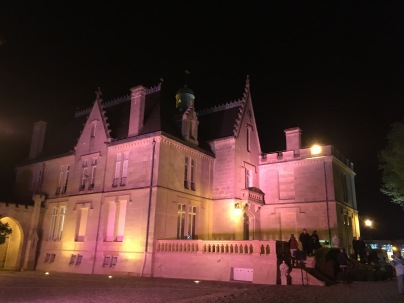 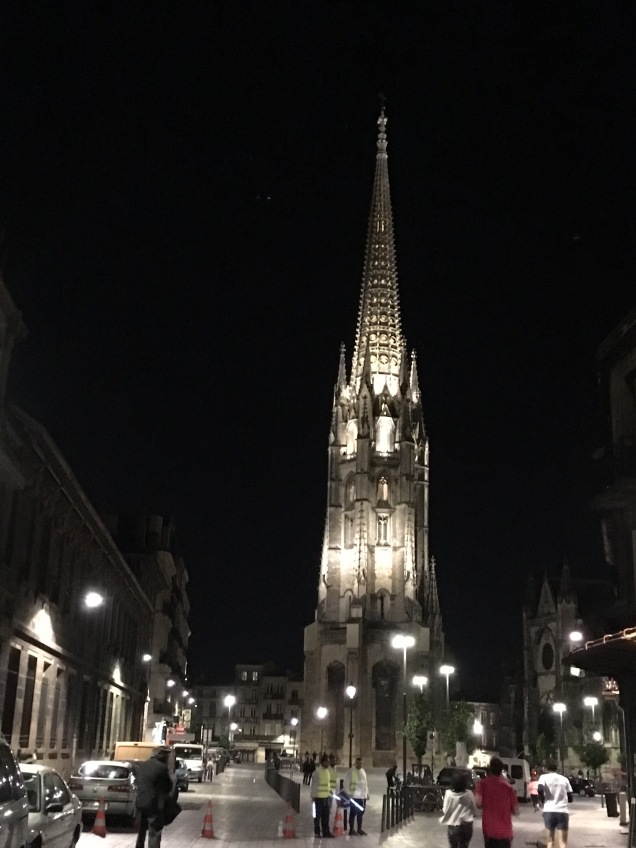 The Basilica of Saint Michael is the second of the three on the Camino de Santiago route.

The start time at night meant the weather was perfect for running too. It hovered between 11 to 18 degrees Centigrade. The period wind gave it the chill factor. There was entertainment along the way.

The route was well-lit and wound its way through pavement, vineyard trails, and cobbled stones. It was patrolled by policemen and volunteers and generally safe. However, I would advise you to run with someone, especially if you are female. There was a spot in the route where male teenagers were cheering everyone. One got carried away and lunged at me, startling me out of my zen zone. This was the only moment that marred my otherwise positive experience of the marathon.

I finished the marathon after 1:00 AM that night. The city was still rockin’ and rollin’ ; the Place de la Bourse was alive with the music and the light show. 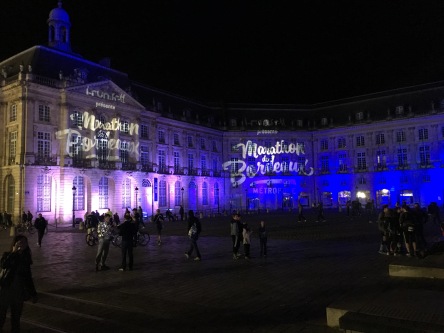 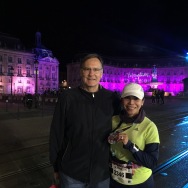 We flew back to Brussels on Sunday afternoon, April 16, 2017, with easyJet.

Like Loading...
This entry was posted in Marathons, Places, Places to See, Race Reports, Things to Do and tagged bordeaux, camino de santiago churches, marathon bordeaux, wine. Bookmark the permalink.