The status of Alexander the Great greets visitors along the seafront promenade in Thessaloniki.

Thessaloniki is a city that united three civilizations – Greek, Roman and Byzantine. She was named after the Macedonian queen, Thessaloniki, who was also the half-sister of the conqueror Alexander the Great. Legend also has it that Thessaloniki was a mermaid who ruled the Aegean waters. She would always ask, “is my brother Alexander still living?” whenever she met a ship at sea. If the answer is “yes, he is alive and rules”, the ship safely sailed. If the answer was no, she turned into a Gorgon and destroyed the ship.

Today, it is the second capital of Greece after Athens as well as the capital of Northern Greece and Macedonia. We took the 7:10 AM Ryanair flight from Brussels Charleroi to the city on Saturday, March 31, 2018 to take part in the 13th Alexander the Great Marathon the next day.

We were exiting the airport by 11:00 AM after the two and a half hour flight. Thessaloniki is an hour ahead of Brussels. People can take the airport taxi to the city center or the hotel for 27€ or take Bus 78 for 2€ per person. We opted to take the cheaper transportation. The bus stop was right in front of the arrivals hall. It took us about 40 minutes before we got off at the 12th stop, Platia Aristotelous or the Aristotelous Square.

We were booked at the Electra Palace Thessaloniki Hotel for the weekend. The hotel is strategically placed at the corner of the square overlooking a cove of the Aegean Sea.

The Electra Palace Hotel is the second building on the left overlooking the Aristotelous Square.

Our room was not ready yet so we left our luggage at reception and walked to the 19th-century Ladadika district to have lunch. The neighborhood is a party place in the evening with its trendy bars and restaurants but it was nice and quiet at noon.

Satiated, we walked along the seafront promenade to Helexpo to pick up my bib. 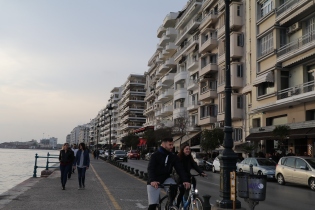 The expo promoted various sports-related products and sports federations. There were drills and exhibitions going on in every corner. 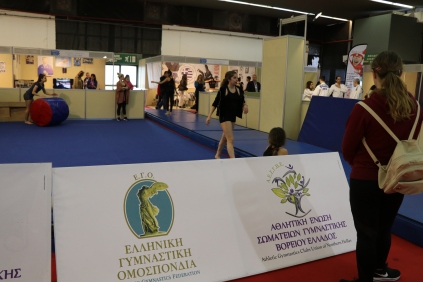 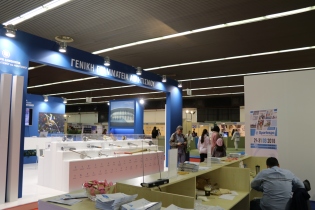 I availed of the Advanced Package of the marathon. The package included the waterproof jacket, string bag, neck buff, and the race shirt. 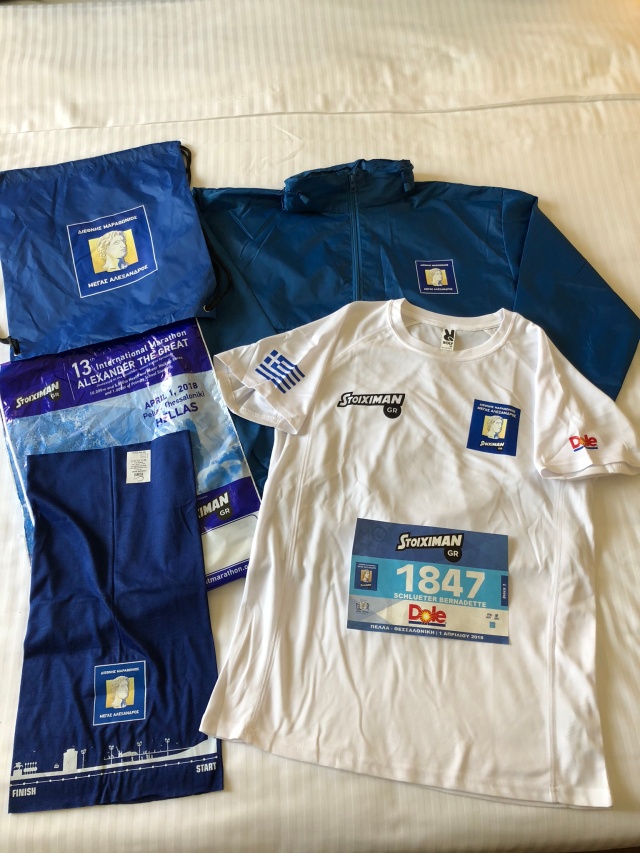 On the way back, we stopped to have our photo taken in front of the bust of the Greek Admiral Votsis and the 15th-century White Tower, the symbol of modern Thessaloniki. Richard also took photos of the tower at night. 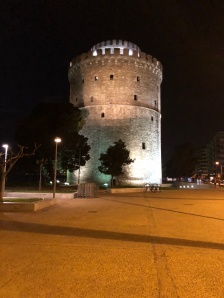 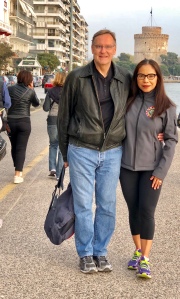 We detoured on the way back to visit the 8th-century Agia Sofia, a UNESCO World Heritage Byzantine church, and took some photos of the Saturday afternoon scene.

The promenade had bars packed to the brim that Saturday afternoon. We stopped at the Nuts Factory along the way to buy some nuts. I was amazed at the many variations of the nut products and the creative way they were displayed. The storefront had three giant circular conveyors that rotated and cooked the nuts. Inside, they had two other cleverly designed flat conveyors that served as both as cooking and display stations. 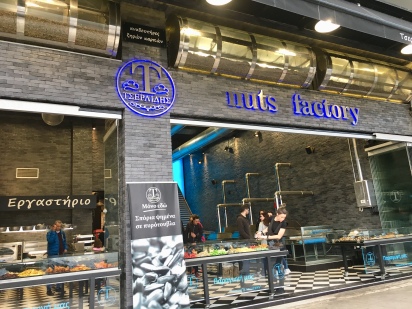 Had a quick nap when we got to our room.

We were out again in the early evening to find the perfect spot for dinner. We walked around and ended up at one of the restaurants in front of the Aristotelous Square.

Starting line was in front of the Alexander the Great statue in Pellas. We woke up at 4:15 AM to get ready and be at the bus pickup at 5:30 AM on Manoli Andronikou Street in front of the Archaeological Museum. It was an 18-minute walk from our hotel so we splurged on a 5€ cab ride. The buses were leaving as they became full with the last bus leaving at 6:00 AM.

I dozed off on the hour long bus ride to Pellas. It was cool at 5 degrees Celsius when we arrived; I sought warmth and shelter at one of the restaurants while waiting for the start time. The race kicked off promptly at 8:00 AM. The point to point race is called Alexander the Great because we started by the Greek statue in front of Pellas and finished in front of the bigger statue in Thessaloniki.

The race was all on roads with very little shade. The day quickly warmed up to 21 degrees. I took off my jacket one kilometer into the race.

The organizers did a great job with the safety and security of the runners. The roads were blocked off with policemen guarding every crossroad. The aid stations were well stocked with bottled water, Powerade, bananas, and oranges. Roving ambulances, car marshalls, and EMTs on bicycles paced back and forth to ensure everyone was running according to pace to beat the six-hour time limit. 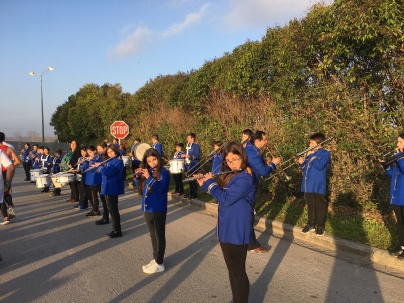 Richard took some photos of the views while he had breakfast at the penthouse restaurant.

We merged with the 5K power walkers and runners halfway past the 39th kilometer mark. The heat was beating me by then. Seeing the huge crowd of runners bouyed up my spirits. Richard saw me first about a hundred meters away from the finish line. 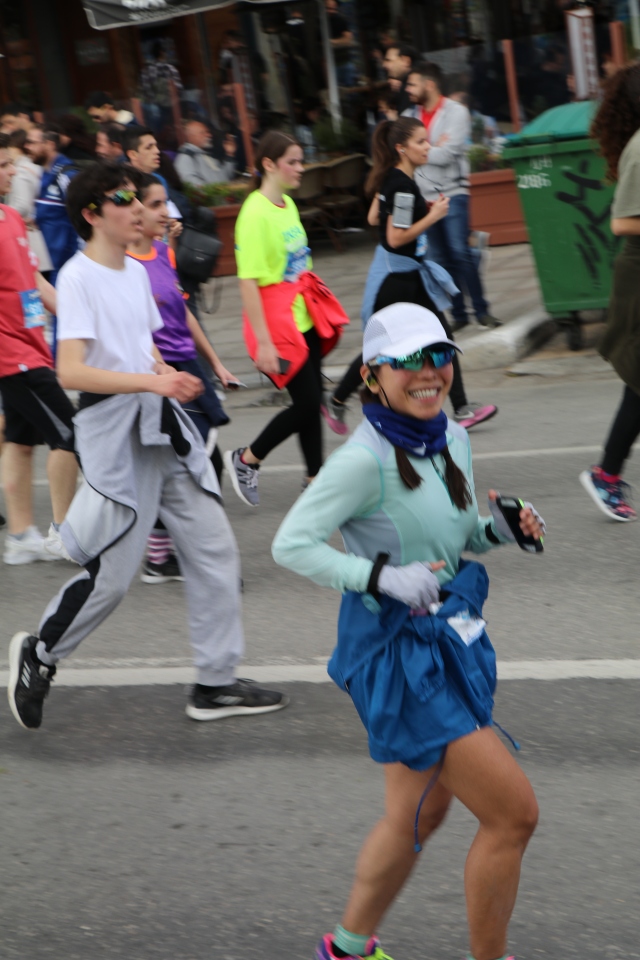 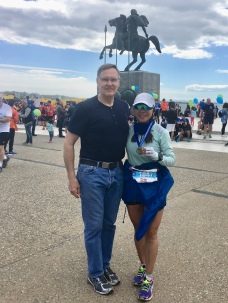 Richard and I made our way back to the hotel, stopping to get soft-serve chocolate ice cream from one of the vendors at the promenade. Our Ryanair flight was leaving at 8:50 PM so I booked us massages at the hotel. Richard had the traditional Swedish while I tried the athlete’s massage with cupping. The experience soothed my tired legs and energized us for the flight back home to Brussels. We walked to the Venizelou stop near the hotel and took the 5:20 PM bus back to the airport.

Like Loading...
This entry was posted in Marathons, Places, Race Reports and tagged Alexander the Great Marathon, Thessaloniki, Thessaloniki Marathon. Bookmark the permalink.