Madrid is beautiful, trendy, and expensive. Still, I could not pass the opportunity to fly to this historical city for the EDP Rock ‘n’ Roll Marathon Madrid 2016 on April 26, 2016.

We took the 9:55 AM Ryanair flight out of Charleroi to Madrid on Saturday and arrived at half past noon. We took the train to Pavilion 12 of IFEMA to pick up my bib and indulge in my favorite sport after running, shopping. I checked out the latest and the greatest running gear at the expo while Richard patiently waited for me.

We took the train back to the city center to check into our hotel, the AC Hotel Recoletos by Marriott. I chose the hotel because of its strategic location to the start and finish line of the race. I had sticker shock at this hotel when they charged me 6 euros for a pot of hot water!

We freshened up and were out and about again to explore the area near the hotel. We took some snaps of the picturesque streets, visited the Royal Palace of Madrid, and stopped by the local supermarket for some basic supplies. Later, we attended mass at the Parroquia de San Manuel y San Benito two blocks away and had dinner at one of the restaurants facing the Puerta de Alcala. 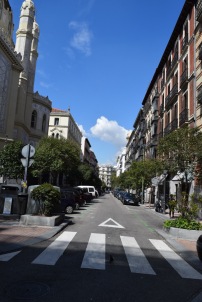 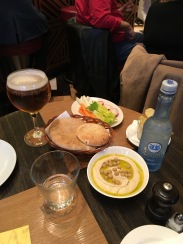 I had time to have breakfast with Richard the following morning since the race started at 9:00 AM at the Plaza de Cibeles a few minutes away by foot. The Madrid Marathon was limited to 12,000 runners as well as a time limit of six hours. As a branded marathon series, the entertainment focused on exclusively on bands. 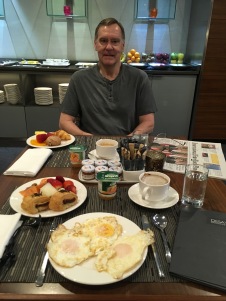 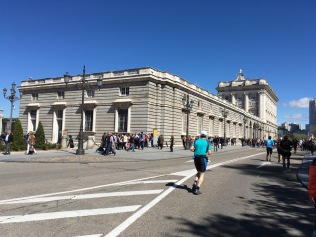 Richard was again waiting for me when I crossed the finish line at Parque de El Retiro. We walked back to the hotel where I took a shower at the hotel’s fitness center before we took the flight back to Brussels at 6:30 PM.