A black cobra awakened to the music of the snake charmer at Jemaa el-Fnaa, a bustling public square in Marrakech declared as a UNESCO intangible world heritage site.

Marrakech was our first foray into Africa so you can imagine our excitement at the thought of running a marathon here. Known as the Red City of Morocco for its distinctive red-orange clay walls and gates, Marrakech is one of the most cosmopolitan Islamic cities showcasing an interesting fusion of Arabian, African, and European histories while creating a culture uniquely its own.

Locals spell their city Marrakech the French way while Marrakesh is commonly used by the English speaking world. We landed at the Marrakech Menara International Airport late in the evening of Friday, January 27, 2017. The Royal Air Maroc flight from Brussels to Casablanca took 3.5 hours. We waited for 1.5 hours at the transit lounge before boarding for the 50-minute flight to the city.

The Marrakech terminal is very beautiful, modern, and considered as one of the most beautiful airports in the world by The Guardian. Immigration control was not done at our port of entry but at the airport in Marrakech. Richard took a photo of the old section of the airport. 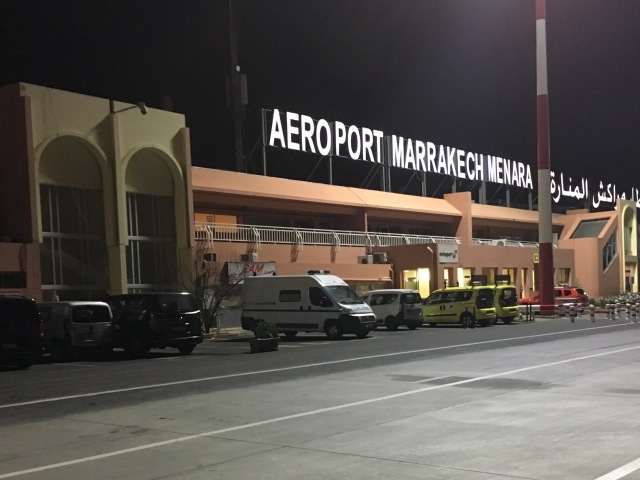 Getting to our hotel was easy enough on hindsight. However, I did not want to hustle with the petit or grand taxis upon arrival so I arranged for the hotel car to pick us up for the preset price of 20 €. The exchange rate for the day was about 10 Morrocan dirhams (MAD) to 1 €.

The weather was cool but wonderful at 8 degrees Centigrade compared to the below freezing weather when we left Brussels. They drove on the same side of the road and we noticed that there were dedicated motorbike lanes on the main highways. What a great idea to prevent accidents and encourage smaller motorized vehicles!

The ride to the hotel only lasted 10 minutes. After breezing through the check-in process, we were tucked in for the night. We were served dinner during the flight so we were not hungry.

The exotic location of the race was immediately evident when we woke up in the morning. Dromedaries were grazing right next to our hotel!

Dromedaries grazing on the field right beside our hotel.

We ate a leisurely breakfast and had the pleasure of being served mint tea the traditional Moroccan way. 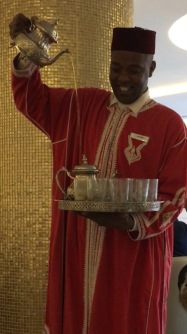 In no time at all we were off to get my bib at the open air expo at Place 16 Novembre. We decided to walk the three kilometer distance to see more of the city. The walk took us past the Bab Jdid, the new gate separating the medina or the old city from the new city, along Avenue Prince Moulay Rachid, the Boulevard Al Yarmouk lined with orange trees, and passing Place de la Liberté before reaching our destination.

Bib pick-up was in several locations inside the expo. My 70€ race registration was handled by the French travel company Escapades and the goodie bag contained the bib and the t-shirt. 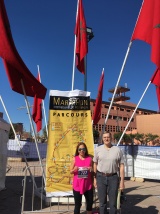 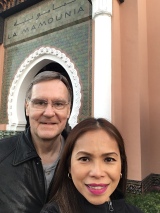 Upon the recommendation of my friend Jim, we stopped by the historic La Mamounia Palace Hotel, the favorite getaway of Winston Churchill.

The start and finish line was along Avenue Prince Moulay Rachid so we paused for a photo in front of the stage. 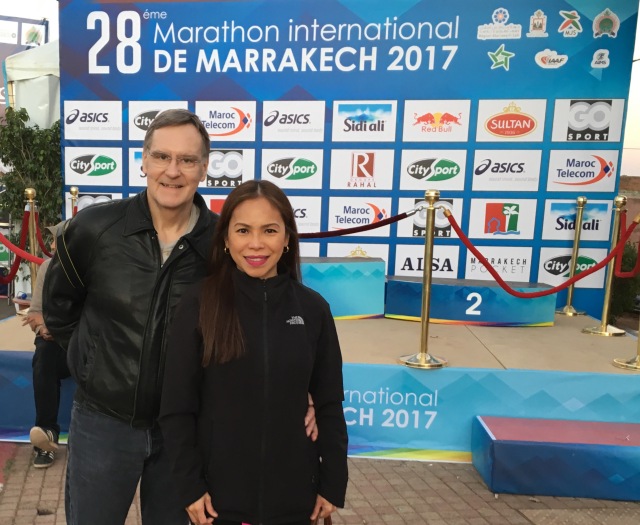 We returned to the hotel to drop off the race accoutrements. Le Savoy Grand Hotel is a colossal five star resort and spa in the Hivernage district with its own Menara Mall. Our hotel room was lovely and overlooked one of the two outdoor swimming pools on one side, and the dromedary pasture on the other side. 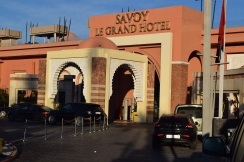 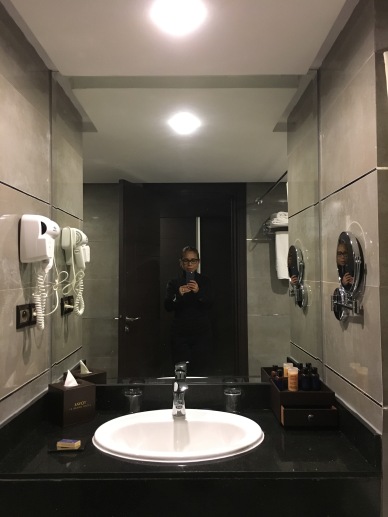 We decided to do a little sightseeing in the afternoon. You cannot visit Marrakech without visiting the souks, the open-air markets or commercial districts that Morocco is famous for.

The first stop was the Kasbah, an area famous for spices. The taxi driver took us to a retailer who was obviously his friend. I already knew about the benefits of argan oil but I listened nonetheless to the sales pitch and bought argan face oil. 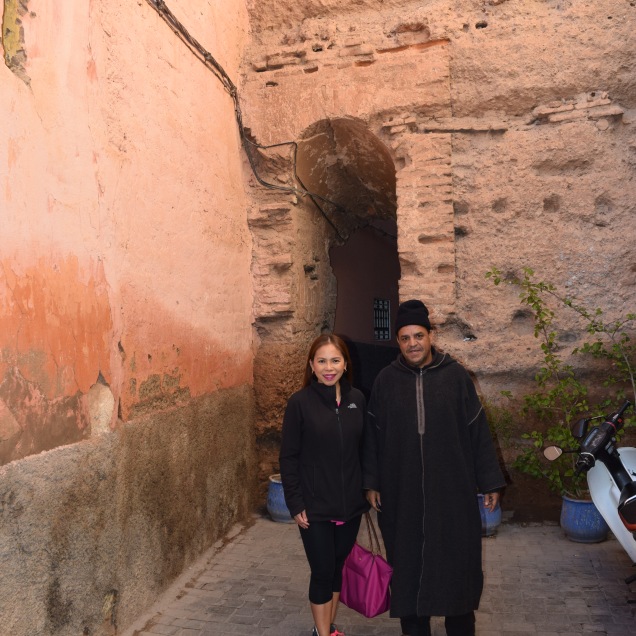 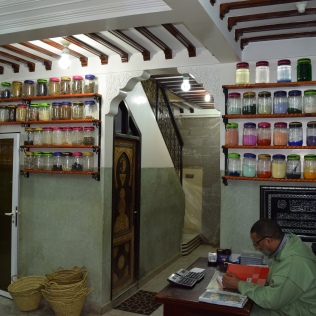 The next stop was the artisan cooperative of the Berber people with tons of home decors and carpets to choose from. Richard already has a massive carpet collection but he was this close to buying another one. Whew! We just looked at some of the beautiful lamps for future buying references.

We made a quick stop at Mellah, the Jewish quarter, to have a look at the commercial activities before making our way to the Jemaa el-Fnaa. This UNESCO world intangible heritage site is unlike anything I’ve ever seen. Tahir shahs, the celebrated water sellers, were plying their trade alongside the henna tattoo ladies, food sellers, and the snake charmers. The street music gave the whole scene a surreal feel.

We walked back from the public square to the hotel, stopping to have our photos taken by the 12th-century Koutubia Mosque, the city’s largest mosque and its symbol. The Koutubia minaret is the inspiration of the Giralda tower of the Seville Cathedral in Spain which was also built in the 12th century.

The Koutubia Mosque in Marrakesh, Morocco.

The Giralda Tower of the Sevilla Cathedral in Spain.

The hotel concierge encouraged us to go back to the Jemaa el-Fnaa in the evening because of the performances that are different from those in the daytime but we just didn’t have time. We had dinner at one of the roadside cafes beside the mall. Richard had the traditional Morrocan chicken tajines while I ate chicken mushroom fettuccine.

The Marrakech marathon on Sunday started at 8:00 AM just a few meters away from the hotel. We arrived 15 minutes before the gun time and the place was already packed. The weather was cool at 8 degrees.

I made friends with a group of local runners who were waiting for the start time of the half marathon 30 minutes later. 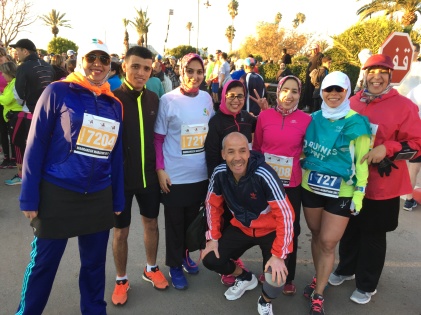 We started right on time and while I ran by the stage, I thought I saw the king of Morocco Mohammed IV surrounded by many high-ranking military officials. The marathon is under his patronage after all.

The marathon course weaved through the Jardins de la Menara, the northern districts and the Palmeraie. The aid stations every 5 kilometers served bottled water and oranges. A few aid stations also served dates. The course was flat with a time limit of 5:30 hours. 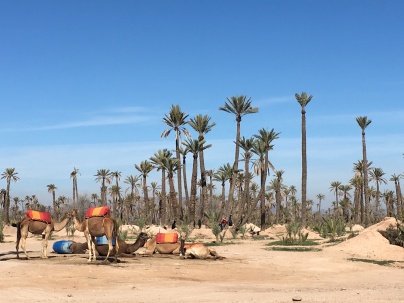 Dromedaries waiting for customers at the Palmeraie, a palm oasis in the northern part of Marrakech. 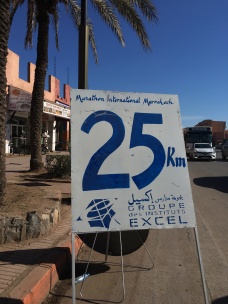 View along the course. 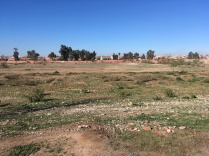 Another view along the course.

The aid stations served bottled water and oranges, and some had dates.

There were spectators at the start and finish areas but we were largely on our own. A few local children were enthusiastic and gave us high fives. I evaded hugs from a group of teenage boys somewhere at the 25K mark. 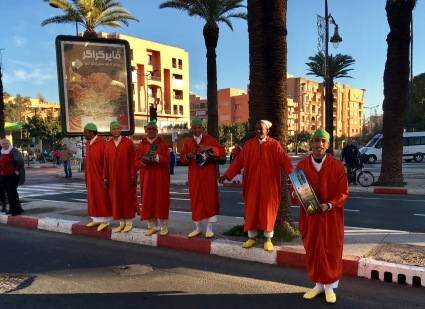 Moroccan men dressed in traditional costumes provided some entertainment along the course. 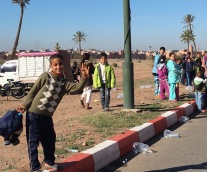 A friendly boy waving at me at the aid station.

Spectators along the course.

The local children enjoyed the race as much as we did.

I was melting by the time I finished the race. By then, the temperature was 22 degrees, still cool by Moroccan standards but too warm for me who rarely trained because of below zero weather conditions in Belgium. Still, I was very pleased I finished the race. I got my finisher’s medal as well as bottled water and more oranges. 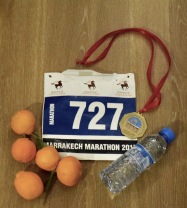 Richard took some photos of the area while waiting patiently for me. 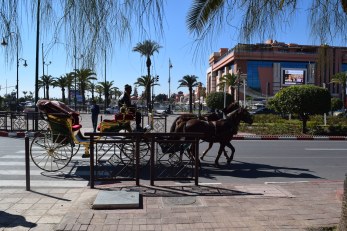 We planned to go to a local hammam afterwards but I was too weary by then. I opted for an argan oil massage at the hotel followed by a relaxing pizza dinner at another roadside cafe. We were back in our hotel room early to catch our flight the next day back to Brussels. The taxi ride to the airport was 100 MAD or equivalent to 10 €.

It was an extraordinary experience and we hope to come back to see more of Morocco. I would love to run the marathons in Casablanca and the blue city of Chefchaouen.