The MILO Marathon series is probably the oldest and the most popular foot race in the Philippines. I’ve heard of the races ever since I was a little girl in Leyte and that was a long time ago! Back then, I thought the races were only for the very fast and the very few. Now, I’m glad to see thousands of new and seasoned runners at the national elimination race every July. Many, like me, just want to run the race. More competitive runners aim to finish with the qualifying times needed to run the national finals in December. Runners may also get into the finals by qualifying through the half marathon distance in other cities held on several dates.

This was my third time to run the National MILO Marathon. I was racing MILO after four other marathons over four weeks so I was realistic and knew my finish time would not be ideal. I was also still nursing my sore quads and a swollen left ankle, results of the beating I took at the 55K Transcebu Challenge last weekend. No matter; I was here to enjoy the races in my birth country.

Registration for the marathon is P1,050 (approximately US$20) with a P100 (US$2) delivery charge. MILO requires a Fit to Run medical certificate to be emailed to the organizers before they will deliver you the race kit. The race kit included the bib, the disposable timing strip, the singlet, a MILO sachet, and the drawstring bag.

I woke up a little past 1:00 AM of Sunday, July 29, 2018 to eat a sandwich and get ready for the 2:00 AM assembly time at the Seaside Boulevard at SM Mall of Asia in Pasay City. Rain was in the weather forecast for the morning. Nice! It will help us cool down. 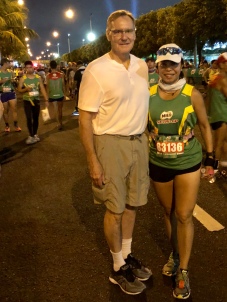 We started right on time at 3:00 AM! The route was different this year. The course took us past the Philippine Senate complex before we got on Buendia Avenue and on to Bonifacio Global City until few kilometers past the Heritage Park on C-5 Road. There were seven u-turns several inclines as we got on and off the overpass. Water with ice was plentiful, with Pocari Sweat at a few of the stations. One of the fire stations along the race route had its hoses out to spray and cool runners as we raced our final few kilometers.

Although it was dark when we started, the streets were well-lighted. There was nothing much to see and no entertainment along the way to distract you. We were running on national roads which we shared with buses, trucks, and private cars. We stopped at intersections to wait for the marshals to clear us to cross the roads. It rained on and off the whole time so I did not take out my iPhone to snap photos along the way.

The cut-off time for this race was six hours, and I shuffled to the finish line at about 5:49. They have not posted the overall race results at this time. The medal is a Sub-6 Finishers’ Medal. From what I understood, those who did not finish within six hours were denied the finishers’ medal. Ouch!

The finisher’s loot was bountiful! Check out what I got. The most coveted entitlement was the sleeveless hoodie.

Richard waited for me patiently at the finish line. We went home to take a shower, get some breakfast, and have a massage.

We flew back to Belgium the day after the race. I’m back at work now, and I must say that our five week summer vacation was very productive!

Like Loading...
This entry was posted in Marathons, Places, Race Reports and tagged 42nd National Milo Marathon 2018. Bookmark the permalink.