The rice terraces of the Cordillera region

When you run several marathons a year, you start to become picky and look for something unique about a race. The 2,000 year old rice terraces in the Cordillera region of the Philippines is a UNESCO world heritage site. As a race location, it is definitely one of a kind and worth the travel.

We left Makati City at 7:00 AM on Saturday, July 16, 2016, expecting to make it to the 5:00 PM bib pick-up and race briefing at Hungduan Heritage Village. The travel time was projected to be eight hours to Banaue via Nueva Vizcaya. We have a highly experienced driver, Mano Bobby, but as first timers to the area we did not anticipate the stop and go traffic on the switchbacks by San Jose City which added almost two hours to the trip. The Maharlika highway closer to Banaue was also punctuated with soil and rocks overgrown with weeds. It was evident landslides occur regularly and made the roads one-lane passageways.

We arrived at our hotel at around 5:00 PM and learned that it will take another hour to get to the municipality of Hungduan. I decided to pick up my race bib just before the start time the following day and rest for the evening.

We stayed at the Banaue Hotel and Youth Hostel, the only luxury hotel in the center of town. The hotel overlooks one of several rice terraces in the area. We got our deluxe room at the off-season rate, but it had no television and air conditioning. We were told no hotel in the area has A/C. Wi-fi was only available in the hotel lobby. They served us warm ginger tea while we were completing the registration cards. 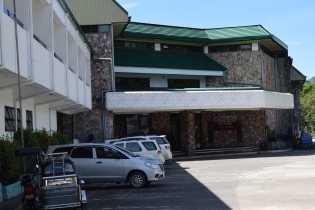 We deposited our bags and ate an early dinner at the hotel’s restaurant.They served our dinner with locally sourced red rice.

The hotel also has a bar and a gift shop. Before calling it a night, Richard and I had relaxing massages in our room for P400 plus P100 tip each.

The 3rd Rice Terraces Marathon had a 5:00 AM start time. We were on the road by 3:15 AM and reached Hungduan right in the nick of time.

The Hungduan Heritage Village was the headquarters of the race organizer, Team Malaya. It is located right in front of the municipal hall, jail, and gym.The Ifugao huts in the village also served as the accommodations for some runners while the rest stayed at various home stays nearby.

The undulating road and trail terrain had two U-turns. The first point was after a short hike to the Balintimol Falls about 8K into the course.

The second turn-around was at the Bogyah Hot and Cold Spring. Runners, including me, took the time to jump into the water and cool off. The heat was merciless so the dip was reinvigorating.

There were plenty of marshalls to guide runners, and red ribbons marked the paths. It was fun to run/walk on the pilapil, the cemented path or dike that channels the irrigation and preserves the terrace shape. 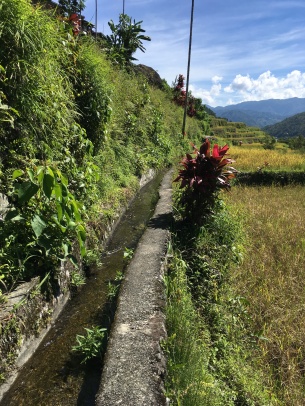 There were two aid stations that we were able to use four times along the route. They served water, Gatorade, salt, chocolate, watermelon, crackers, and sweet potatoes. The volunteers were extremely nice and knew exactly how many kilometers to the next aid station or the turn-around. We passed each of the three first aid stations twice and saw some policemen providing support.

Richard dropped me off at the start line and came back to pick me up after the race. Along the way, he took photos of local life. 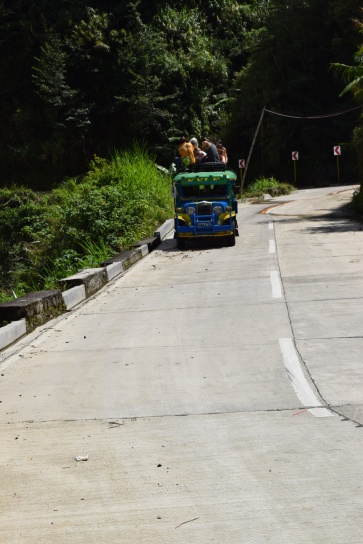 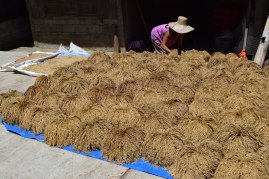 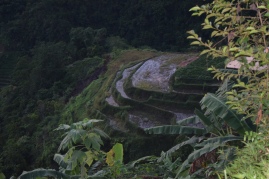 This was a small race despite the fact that we had no cut-off time. Team Malaya organizers that I talked to stated that they wanted to promote the Cordillera region through running events. 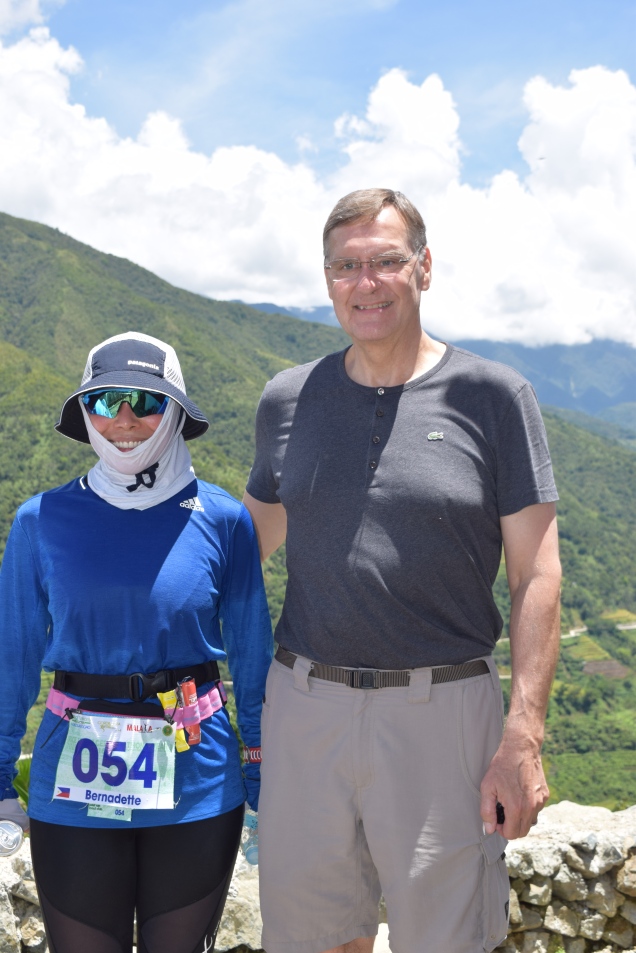 I was pleased to find out I placed second in the women’s division of the marathon. We waited for the awarding ceremony at noon and was on our way back to Makati City before 1:00 PM.

I truly enjoyed the race and hope that it grows in size and importance in the coming years.