Looking for a race to break the monotony of running road marathons? Try the Transcebu Ultramarathon with its deliciously cruel altimetry and breathtaking views of the island of Cebu in the Philippines.

Transcebu is on its third year and has two categories: the 105K distance with a 24-hour cut-off and the 55K route with a 12-hour time limit. I bravely registered for the shorter race with no hill training at all. My goal was just to just enjoy the race (gasp!), the views, and hopefully beat the time.

Richard and I flew on Philippine Airlines out of centennial terminal two on Saturday, July 23, 2016 . The flight took just a little more than an hour so before we knew it, we were already landing at Mactan International Airport. Our hotel was only 13 kilometers away but the taxi ride was almost as long as our flight. The traffic bottlenecks were at the Marcelo Fernan bridge and the roads close to the port.

Best Western Lex Cebu Hotel was one of two recommended hotels by the race organizers and located a few meters away from the provincial capitol in uptown Cebu. Our reservation with the hotel was made through the Expedia website. As a Gold Expedia member, we got the room for US$53, a great deal for two nights with buffet breakfast.

We deposited our luggage in our room and took the taxi to Robinsons in Fuente Osmena. I loved to window shop at this mall back in the day when I was a college student in Tacloban City and was fortunate enough to make the special trips to Cebu.

We also walked around the newer Robinsons across the rotonda but went back to the older building to buy a late lunch at the food court. We settled for crab meat, grilled squid, pinakbet, and ginataan to go at Casa Ilongga. Dinner was chicken barbecue across the street from the hotel at the open-air restaurant Penong’s. I saw some runners and approached them to wish them good luck. They flew in from Singapore to run the longer distance starting at 9:00 PM at the municipality of Toledo.

The race briefing was at the Barangay Busay Multipurpose Hall at 2:30 PM on Saturday but they allowed participants to also pick up the bibs at the starting line. For the 55K, the starting line was in front of the municipal hall of Balamban, the halfway checkpoint and aid station of the other race.

The race organizers provided for a van at Barangay Lahug Market to bring the runners to the starting line. We each paid P120 for the trip that left past 4:30 AM and arrived past 6:00 AM. Because of our late arrival, the start time was moved to 6:30 AM.

We took off running but the crowd immediately thinned out and slowed down when we started walking the uphill roads of the notorious Transcentral Highway. At the 13K mark, we turned left to make a 10K loop at Mount Manunggal, the fifth highest peak in Cebu. The mountain is also historically significant as the crash site of the plane that carried Philippine president Ramon Magsaysay in 1957.

Cows ruled the road going up and down the mountain. The scenes were bucolic and refreshing for transplanted urbanites like me. A group of locals was at the side of the road busily prepping a 90-kilo pig to be roasted as lechon.  I was pleasantly surprised to meet a fellow Waray along the way, Alvin, looking good even after starting at 9:00 PM the previous evening.  Richard and the driver caught up with me and waited for me at the foot of the mountain. We took a selfie a few kilometers farther away. 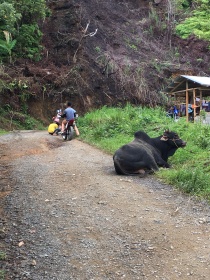 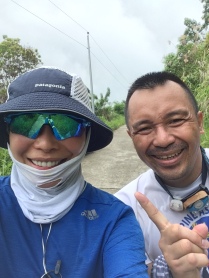 The race  had a maximum elevation gain of 976 meters above sea level with a total ascent of approximately 2,347 meters. The next checkpoint and aid station was at the 32K mark. 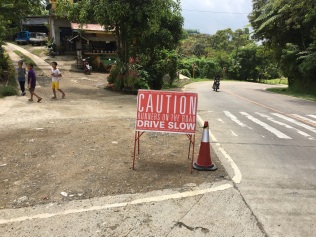 I ran behind, ahead, and alongside another runner, Peter, doing the long distance so when he made a turn, I just followed him. I forgot exactly where we were but this turn was to make the loop at the Temple of Leah. Richard and the driver were my mobile aid station and they temporarily lost me when we made the turn off the main highway. The barangay road was both paved and unpaved at certain areas. I saw another group of friendly locals enjoying their Sunday afternoon with Tanduay rum, chicken barbecue, and lechon. One side of the mountain was literally covered by a camp of fighting cocks. Cockfighting is another favorite past time of the Filipinos. 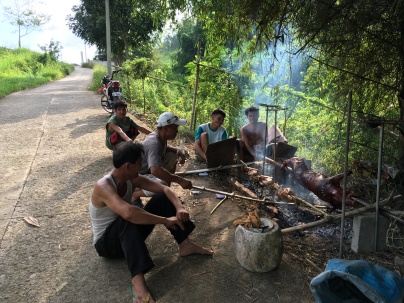 The Temple of Leah was at the end of the loop. The temple piqued my curiosity with its huge edifice still under construction but already filled with tourists. I went online after the race to find out that this was a temple of love dedicated to the wife of a local businessman and grandmother of a Filipino actress. Is this our local version of the Taj Mahal? 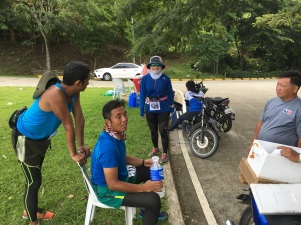 I was so happy to just finish the race but got an unexpected surprise when they told me that I also came in second in the race. Yes! I barely made the cut-off time but I’ll take the award any time. 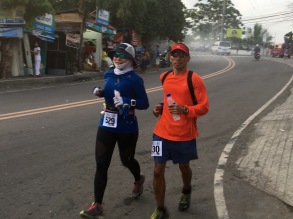 Thank you for a challenging race, Cebu!