One of the breathtaking views along the race route in Hulu Langat.

Summer marathons are events to look forward to. This is the season for us to try races in Asia since we are already in the region. I found the information for the Hulu Langat Marathon on the Ahotu Marathons website and quickly signed up back in the spring when I figured out the logistical details were not complicated.

We flew via Philippine Airlines from Manila to Kuala Lumpur on Friday, July 5, 2019. As a frequent traveler using budget airlines, I forgot that the ticket fare full meals on board. I enjoyed my chicken meal and relaxed for the three and a half hour flight.

We arrived at Kuala Lumpur International Airport and immediately proceeded to the airport taxi counter. The taxi fare was 140 MYR or US$35 at the current conversion rate of 4 MYR to US$1. The Grab car hailing service in the ASEAN region started in Malaysia but it didn’t cross my mind to book a Grab car until later.

It took us about an hour from the airport to Shangri-la hotel, our accommodation for this trip. We checked in quickly and rested for a few hours.

The hotel has a free shuttle service to the Suria KLCC Mall beside the Petronas Towers at specific intervals during the day. We hopped on the 5:00 PM service and got off right in front of the luxury mall. We spent the evening browsing stores and checking out the two supermarkets before deciding on a quick dinner at the food court.

It was an easy 10-minute walk back to the hotel. What do you know? HBO is showing Entrapment, the Sean Connery and Catherine Zeta-Jones art heist movie set inside the Petronas Tower. Richard stayed up to watch the whole movie.

Shangri-la buffet breakfasts are always  lavish and the Kuala Lumpur version was no exception. I could stay here and just eat all day! 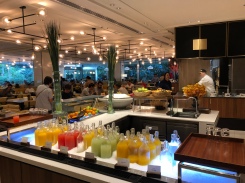 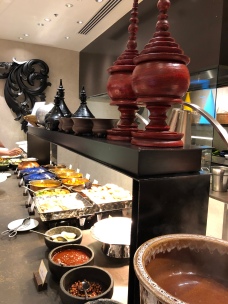 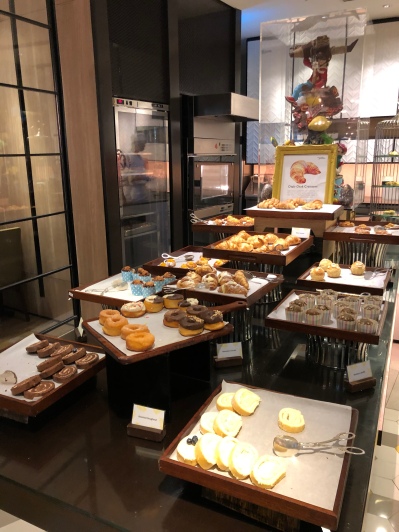 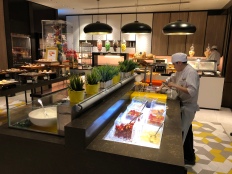 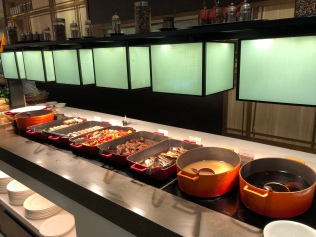 A short run at the fitness center was in order after the full breakfast. I did not run at all since my last race in Rochester in the UK two weeks ago. My joints needed some loosening up!

It was afternoon by the time we were ready to venture out into the city. We booked a Grab car to visit the nearby Batu Caves. The popular Hindu temple attraction itself is only 100 years old but the lime formations surrounding the temple is said to be 400 million years old. I decided not to go up the 200 steps into the caves itself knowing that I have a marathon to run tomorrow.

The scene at the temple grounds was interesting. Monkeys were running around and grabbing food from tourists, pigeons were swooping in to grab the scraps, and tourists were buying more food to give to monkeys and pigeons!

We took another Grab car to take us to the Suria KLCC Mall. We got off in front of the Petronas Towers for a photo op first. We also came back in the evening for an night shot of Kuala Lumpur’s iconic symbol.

Back to the hotel for an early night.

We were up at 2:00 AM to get ready for the race and out the door by 3:00 AM. The Grab ride took about 40 minutes (65 MYR) to the race headquarters, the SJK Choon Hwa in Hulu Langat. Richard took me to the race start and took the same car back to the hotel.

I picked up my race bib and waited quietly for the race to begin. The race was organized by Malaysia Ultra Running. I expected a small race but was pleasantly surprised to see more than 300 runners taking part in the marathon. Some of the runners just wore socks and slippers. 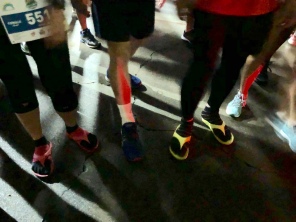 We took off running at 4:30 AM. It was still dark and would remain dark until around 6:30 AM. Once it was light, I could not help but ooh and aah with the scenery along the road.

Runners started off nice and easy before the fast ones found their grove and hit the speed button. I took my time, confident in the eight hour time limit but knowing that it will not be a flat course. I also noticed that the Muslim runners stopped running at dawn and did their morning prayers right on the side of the road. They packed up and resumed running afterwards. The route had two turn around points with timing mats. The aid stations were impressive. What impressed me most was not the usual plentiful bottled water and 100 Plus energy drinks but the fresh fruits at the selected stations. We had bananas, jackfruit, rambutan, coconut, watermelon, and durian! I grew up in the Philippines and am familiar with the durian but I just couldn’t imagine eating durian during the race. They were opening fresh coconuts and serving them to runners with straws. Love this race!

It was raining intermittently, helping us cool down and make the race pleasant. At around noon, the sun decided to peek through and it became hot.

I crossed the finish line in 6:31:01. They gave us our medals and finisher shirts. We had our pick of sweetened tofu, jackfruit, and rice meal.

I luckily chanced on a Grab car nearby who took me back to Shangri-la hotel for 40 MYR.

Richard was waiting for me and walked me back up to our room. I took a shower and rested for a while. It was back to the now familiar Suria KLCC Mall where we got some fruits and chips at Cold Storage and Isetan, and takeaway at the food court.

It was time to fly back to Manila before we knew it. We took the noon flight on Monday, July 8, 2019.

I truly enjoyed this race. The registration fee was very reasonable, the route was interesting, and most importantly, the race organizers took very good care of us. I hope to be back to run this race again.

Like Loading...
This entry was posted in Marathons, Places to See, Uncategorized and tagged Hulu Langat Marathon. Bookmark the permalink.